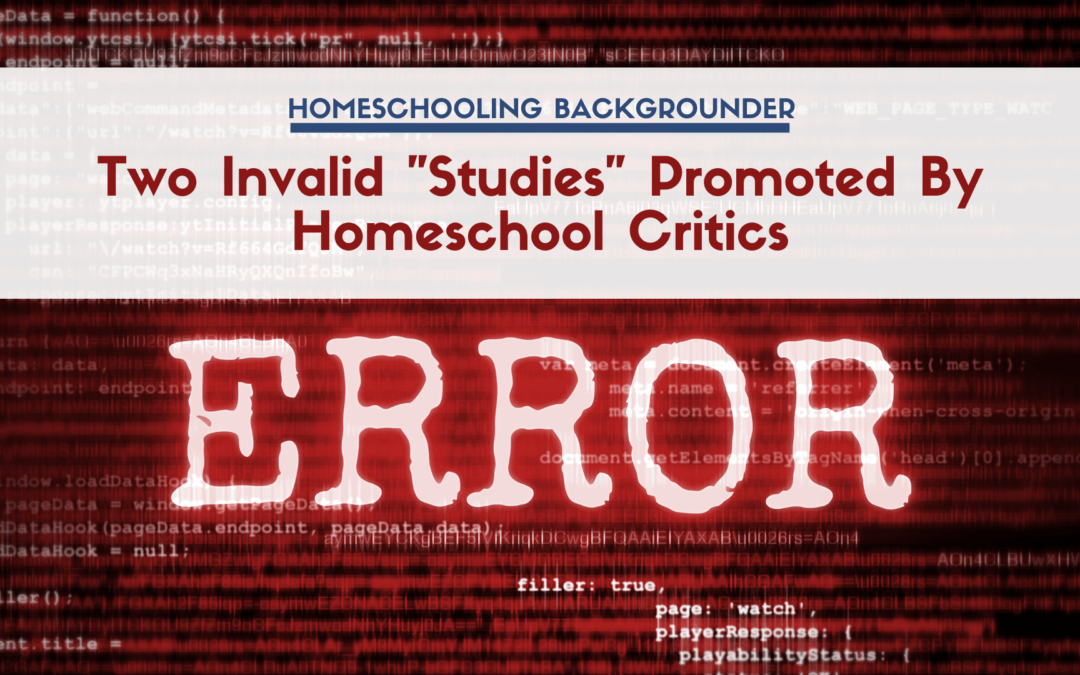 The two invalid studies as described by homeschool critics

A study in Connecticut published in 2018 found that among children removed from the public schools ostensibly to be homeschooled, 36 percent were in families that had previously had valid reports of child maltreatment, and most of those were in families with multiple prior reports for abuse or neglect. A 2014 study by child abuse pediatricians of 28 child torture cases found that of the 17 school-age children, 13 were either homeschooled or simply not allowed to attend school.

One telling study is a systematic analysis of all students withdrawn from regular school, allegedly for homeschooling, in six Connecticut school districts over a several-year period. It found that of the 380 students withdrawn, more than one-third lived in families with at least one prior accepted report to CPS of child maltreatment and one-fourth lived in families with multiple prior reports….

In another study, child abuse pediatricians from five U.S. medical centers focused on a sample of cases involving horrific child torture. They found a powerful connection with homeschooling. Out of the school-age children, 29% were never allowed to go to school and another 47% were withdrawn for homeschooling. They concluded that this “homeschooling” typically occurred after closure of a previously opened CPS case and appeared designed to further isolate the child.

For example the Connecticut study, finding that 36% of parents who withdraw a child from school, ostensibly to homeschool, have previous screened-in maltreatment reports.

This report is not a study in any scientific sense of the word. It is instead a government report on the results of an ill-designed data collection project. It should not be used as evidence upon which to base policy decisions.

The districts were hand-selected. No reported attempt was made to make them representative of their size class, such as randomly selecting them from similarly sized districts (a simple, normal analysis step).

There was no report of weighting the district results according to total number of students in each size class. This likely underestimated the impact of smaller districts.

A second, much larger survey of school districts (18 districts vs. 6) was conducted. There is no indication that this second round of data was selected with any better process than the original hand-picked one. Still, the larger number of districts would have provided a more informed estimate — either agreeing or conflicting with the original data. The Child Advocate declined to analyze this additional data or release redacted copies of the data after it was collected.

A misleading use of the term “valid”

Bartholet and her coauthors assert “36 percent were in families that had previously had valid reports of child maltreatment.”

The only sense in which these reports were “valid” is that they described a situation in which the statutory definition of child abuse or neglect would apply. This meant they were accepted into the Connecticut Department of Children and Families system for further review or investigation.

The 2014 study, in contrast, has scientific validity. The problem is that homeschool critics claim it shows something it doesn’t.

This series and paper is limited in that it is a select and by no means, inclusive series, of abuse cases.They have been chosen to be illustrative of the phenomenon of torture, but cannot be considered a consecutive case series for statistical analysis.

We sought to identify medical criteria distinguishing these cases from other forms of child abuse and present reasons for creating a new subcategory of child maltreatment…. They [the abuse cases] did not represent all potential cases from any institution.

That is, the reported abuse cases were specifically chosen (hand-picked) out of the complete set of cases to highlight the characteristics of a distinct type of abuse rather than to maintain a representative sample of homeschooled, public schooled, or private schooled students.

They are not a random sample. The paper’s authors make clear the abuse cases in their study cannot be used for statistical analysis purposes. So they cannot be used to characterize homeschooled children as a group.