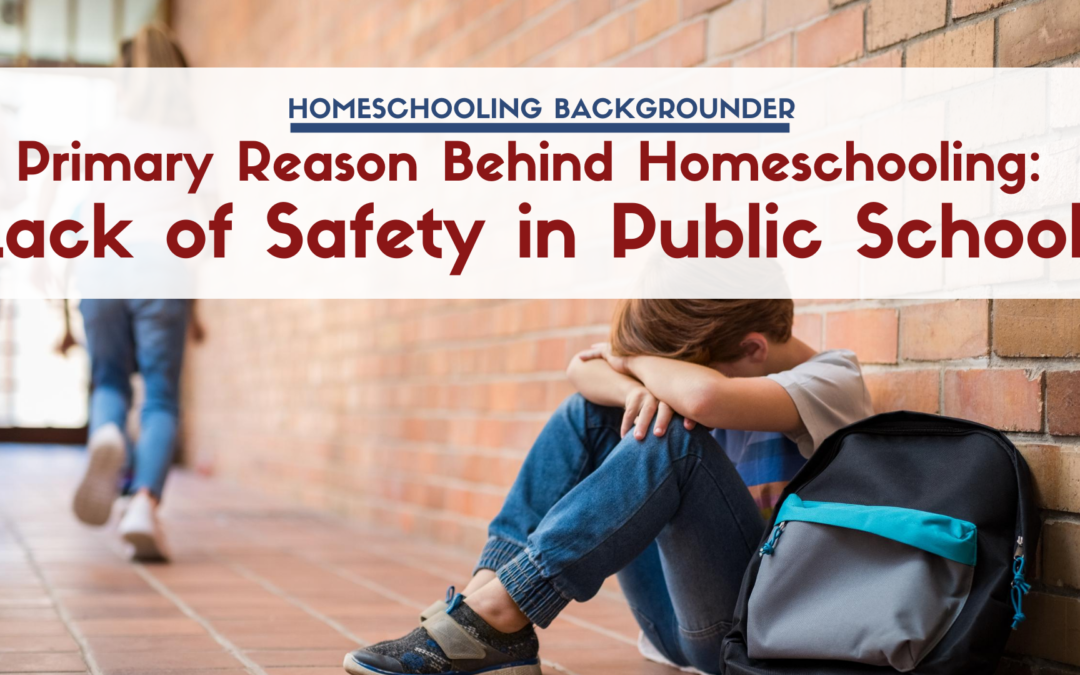 During my 40 years in the field of school psychology, I’ve observed a significant shift in parents’ primary reasons for homeschooling. Years ago, parents ranked religious reasons at the top of their motivations for homeschooling their children, but they now list safety concerns that they have for their children in traditional schools, especially public schools. The data show parents are right to be concerned….

Parents are justified to be concerned about school safety because, in 2015-16 (the most recent school year for which NCES data are available), at least 1.4 million crimes occurred in the nation’s public schools. Weapons were not involved during 257,000 threats of physical attack; 567,000 actual attacks; and 9,500 robberies. But, appallingly, weapons were used during 5,300 attacks or fights; 18,300 threats of violence; and 600 robberies. During that same year, 1,100 rapes or attempted rapes and 6,100 sexual assaults occurred in schools.

Many nonviolent crimes were also committed in schools during the 2015-2016 school year. These incidents involved approximately 10,500 students having firearms or explosive devices and 70,600 students with knives or sharp objects in their possession. Additionally, there were 166,000 thefts, 107,200 acts of vandalism, 29,900 incidents involving possession of alcohol, 112,100 crimes related to the distribution, possession, or use of illegal drugs, and 20,100 incidents that involved prescription drugs.

Taken together, the number of violent and nonviolent crimes listed above seems excessive, but these numbers are actually conservative estimates because school officials underreport crimes to the police about one-third of the time. Consequently, the statistics lend credence to the notion that many public schools are, indeed, unsafe environments for school children.

Bullying is another safety issue that students get exposed to across the country regardless of sex, grade, race, ethnicity, household income levels, school size, student-teacher ratio, and school locale (i.e., city, suburb, town, rural areas). For example, roughly 20 percent of students attending public and private schools (i.e., 11.2 million of 55.9 million students in the US) reported being badly treated by other students in a variety of ways. Specifically, in 2017, 3.2 million students reported being made fun of, called names, or insulted while the same number of students were the subject of rumors. Additionally, almost one million were threatened with harm while 1.3 million said they were pushed, shoved, tripped, or spit on. About 466,000 students reported that others tried to make them do things they did not want to do, and roughly 1.3 million students indicated that they were purposely excluded from activities. Finally, 348,000 students reported having their property purposely destroyed. Bullying is a significant and long-standing social issue facing students and educators, but the gap between research findings and real, tangible solutions seems to be growing. Because translating research knowledge into real solutions is proving to be difficult, the problem of bullying is not likely to decline significantly any time soon.

With crime and bullying regularly occurring in traditional public and private school environments, it comes as no surprise that male and female students of all races and ethnic groups feel less safe in school than they do away from school, regardless of whether they attend public or private facilities in urban, suburban, or rural areas. Furthermore, if these dangerous patterns of behavior persist, one should not expect parents’ concerns for their children’s safety to subside nor be surprised if the number of homeschool families continues to increase.

Source: Primary Reason Behind Homeschooling is Lack of Safety in the Public Schools. Excerpt posted by permission of the author.