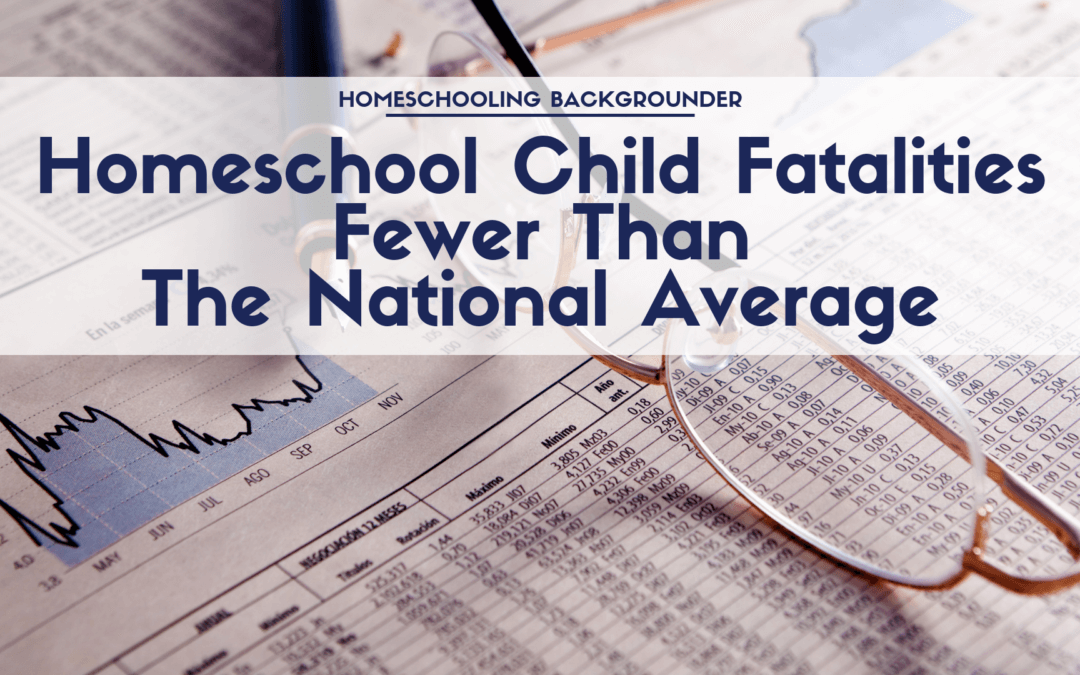 Critics say that homeschooling can be a haven for child abuse and neglect due to the opportunity for abusive parents to hide child maltreatment from outside observers. They advocate for regulations on homeschoolers to provide protective oversight of homeschooled children.

Fatalities are hard to hide. So the child fatality rate is a useful marker for the prevalence of child abuse and neglect in general among homeschoolers.

This article is about child fatalities as they relate to putting regulations on homeschoolers.

We will compare the fatality rate for students legally homeschooled with the nationwide student fatality rate. Our data will come from the ten most recent years that homeschooling statistics are available: 2003-2012.

Students can be in one of four legal status groups:

We normally expect these legal status groups to also indicate education status: Is the student being educated or not. There is a strong correlation, but there are exceptions.

Some schools pressure parents of low-scoring students into “homeschooling” them, in order to raise the school’s standardized test ratings by eliminating low scores. Such parents are normally not prepared to actually educate the student.

Parents reported for possible child abuse can just withdraw their child from school and file the state’s homeschooling paperwork. This move is not intended to educate the child, but rather to hide abuse.

In the other direction, there are conscientious objectors who, out of principle, do not file the homeschool paperwork. Their students typically get a good education because the parents feel strongly about the education of their children.

Gathering data on legal homeschoolers is complicated by the fact that truant parents masquerade as homeschoolers to avoid prosecution.

This leads to public data classified as “homeschool” actually being an agglomeration of two separate groups: legal homeschoolers and truants masquerading as homeschoolers.

So we need to carefully disaggregate the data into these two distinct types of students as we perform the following analysis. We label the jumbled up grouping as “those who claim to homeschool.”

Expected fatalities will be a two-step calculation. First we will determine the expected number of student fatalities among those who claim to homeschool — both legally homeschooled and truants combined.

Then we will allocate those expected fatalities separately to the legally homeschooled group and to the truant group based on their relative population sizes.

Expected student fatalities among those who claim to homeschool: 59

The expected number of student fatalities among all those families claiming to homeschool during 2003-2012 is 59.

This is the number of student fatalities nationwide multiplied by the proportion of students whose parents claimed to homeschool during that period.

(The exact calculations are too tedious to include here. But all the data is available in the sources listed below.)

The proportion of truants among those who claim to homeschool is determined by how many people are willing to break the laws regarding education. We use the school dropout rate as an estimate.

Dropout decisions are made primarily by students, while truancy decisions to masquerade as homeschoolers are made by parents.

Students are more likely to engage in risky behaviors than parents. So if anything, we expect this estimate to err on the side of a higher masquerading truancy rate than the actual rate.

Given an expected 59 fatalities among those who claimed to homeschool in 2003-2012, that results in 4 truant and 55 legally homeschooled expected fatalities.

The most complete publicly available collection of fatality occurrences among those who claimed to be homeschooling has been compiled by Homeschooling’s Invisible Children, an organization advocating increased homeschool regulation.

Low regulation states do not have detailed reporting requirements for homeschoolers.

There is no evidence that parents from low homeschool regulation states are materially different than parents in other states. So we extrapolated the recorded 21-legal-to-19-truant ratio onto the 21 low regulation cases: 11 legally homeschooled and 10 truants.

That gave a total of 32 legally homeschooled and 29 truants among the 61 student fatalities from those families who claimed to be homeschooling during 2003-2012.

Legally homeschooled students have 40% fewer fatalities than the national average

We looked at the ratio of legally homeschooled student fatalities compared to those expected based on the national average for all students: 32 fatalities / 55 expected = 58%.

Legally homeschooled students are 40% less likely to die by child abuse or neglect than the average student nationally. 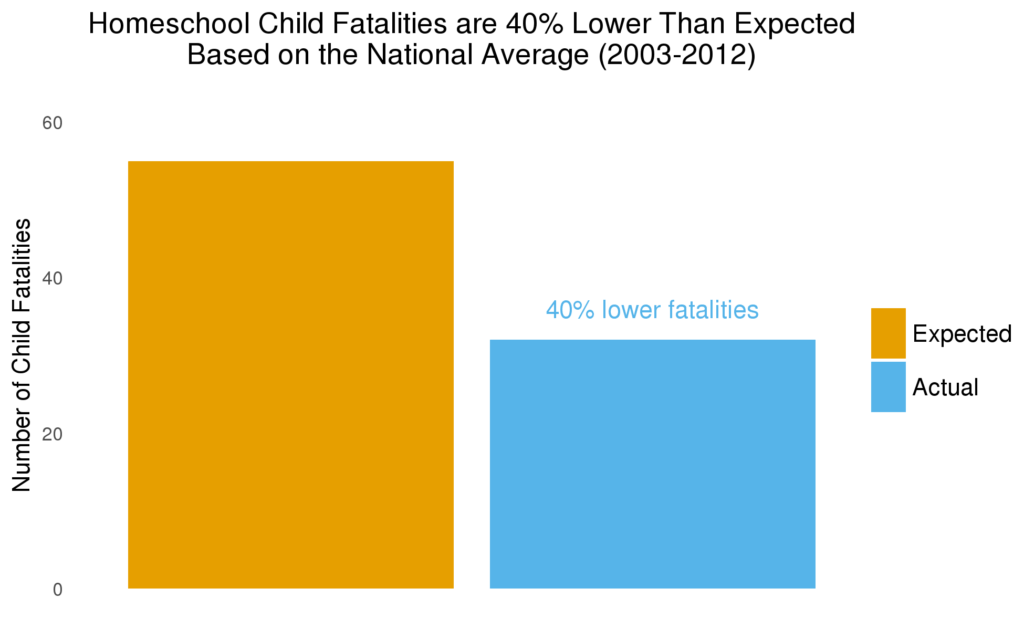 How strong is this evidence?

We are concerned in this article with the proposition that potentially high rates of fatalities among homeschoolers require regulation to protect homeschooled students.

The 40% lower fatality rate, per se, is important, as would be 30%, 20% or 10%. But the critical point for our purposes is that the homeschool rate is lower than or equal to the national rate.

So there is no need to regulate homeschoolers for student protection purposes.

How different would our numbers have to be to bring the fatality rate for legally homeschooled students back upwards to the national average?

One way would be for the homeschool fatality count to move from 32 to 55.

Correspondingly, the truant fatality count would need to move from 29 to 6.

The truant classifications were based on specific reported characteristics or circumstances that indicated the parents would not have filed the homeschool paperwork.

23 out of 29 apparent truants being misclassified would be like 23 out of 29 people with an appearance of being intoxicated actually being sober. It is possible, but highly unlikely.

A different way would be for the expected truancy rate to move from seven percent to the point where for every 100 legally homeschooled students there were an additional 85 truants.

The author knows of no evidence-based theory of truancy which would yield that large an estimate of truants claiming to be homeschoolers, given the numbers and characteristics of homeschoolers.

There is no evidence that existing homeschool regulations caused the low fatality rate among legally homeschooled students.

Public schools are highly regulated. Yet public school child fatality rates are higher than the rate for those legally homeschooling.

State homeschool regulations are designed to address academic rather than social issues. It is hard to envision how such academic requirements would have caused parents to refrain from child maltreatment.

Homeschool regulations only affect legally homeschooled students. There is no reason to impose “protective” regulations on families who already are prone to a lower fatality rate than the rest of the nation.

Question: Why do you break truants into the two groups?

Question: What if I think I have a better estimator than the school dropout rate for the proportion of truants among those who claim to homeschool?

Answer: Then propose it. But it needs to be a reasoned approach with an estimation process based on systematic evidence. Anecdotes are not sufficient.

Question: How do you get a status dropout rate of seven percent?

Recall that the status dropout rate is a rolling average of actual dropout events which happened in the past. So the 2004 status rate is the earliest one that could be affected by 2003-2012 dropout events.

The actual dropout rate would be lower than the upper bound.

We can get a better estimate by identifying the status year(s) which correspond to the event years 2003-2012.

The midpoint of the status age range is age 20. So the status dropout rate estimates dropout events for a 9-year span centered five years prior.

It is actually more complicated than that. But this estimate will do for our purposes.

Question: What criteria did you use to classify truants?

Answer: We used contemporaneous news reports available online to determine the characteristics of the parents or caregivers and the circumstances of the case.

If that information indicated the perpetrators would not be likely to have filed the required paperwork, we categorized them as truant.

Note that family members’ claims to be homeschooling are not evidence that the family is legally homeschooling. Children are not involved in filing official documents, so they would not know the legal status.

Neither would extended family or neighbors. Even the police, who depend on what people are telling them, may not know (see https://abcnews.go.com/US/zahra-baker-search-ransom-note-lack-witnesses-strain/story?id=11848643 vs. https://www.observernewsonline.com/content/no-home-school-record-zahra).

In the first case on our list of truant fatalities, the perpetrators committed welfare fraud by lying in state documents and collecting nearly $175,000 for the victim and his brother over a period of eight years.

There is no evidence that state homeschooling paperwork was filed on the victim.

In the case of the next four fatalities, all from the same family, the family moved a lot. This makes it unlikely that the perpetrator would have kept a current address on file as required by state law.

He was convicted of welfare fraud. And the family’s last residence was in a structure zoned commercial-only.

He had been ordered to leave the building or to acquire a special permit, which he had not done at the time of the killings.

In the third case, the victim was killed two and a half months after the family had moved to a new state. He was tortured to death.

The victim’s older brother had been killed before the move. It is difficult to picture the perpetrators taking time out after their move to file homeschooling paperwork with the state.

In the fourth case, the perpetrator collected state benefits for the two girls killed for probably a year after their deaths. There is no indication that state homeschool paperwork was filed.

A surviving girl told police she went to school, though there were no records at surrounding schools of her attendance.

These are the first seven truant fatalities on a chronological list. The other cases labeled truant either lack any indication of legal compliance or have indications of probable truancy.

Question: Why not classify all fatalities from low regulation states as legal?

Answer: Each state’s compulsory attendance law requires children to attend school. Exemptions require that the parent assures that the child is being educated.

Whether or not there are reporting requirements, the parent is still legally required to furnish the child an education.

If the child is not being educated, the parent is breaking the law and the child is truant — even if the state does not know about it.

In low regulation states, where there are no regulations requiring homeschoolers to report, the definition of legal reverts back to whether or not the child is being educated.

It is not that there are no truants in these states. Rather, there is no apparent way to determine truancy status given the information available to us through public sources.

If we were to mechanically classify all students as legal, then we would be distorting the data. An accurate portrayal is to say that we just do not know whether a student was legal or truant.

Again, there is no evidence that parents from low homeschool regulation states are materially different than parents in other states.

So we chose to use the data that we did have from other states to estimate truancy vs. being legal in the low regulation states.